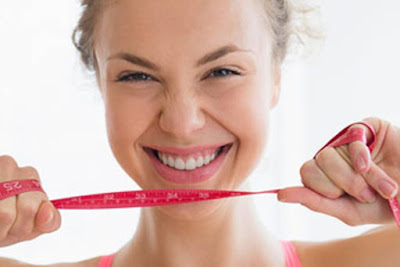 You want to lose weight permanently - but no diet achieves the desired results? Then try the following 15 tips for weight loss.

If you eat quickly, you will get fat. Why is that? Various studies in recent years have shown that eating slowly improves digestion and saves calories. If you take your time while eating, the satiating hormones in the blood increase. And that, in turn, means that you generally eat less. Also, meals are easily digested and the nutrients contained are better utilized. Slow food is, therefore, worthwhile in several ways.

A team of researchers from Arizona State University recently examined the satiety of 300 students. The subjects were given a bagel to eat. Half of the participants ate their bagels whole, the other half in pieces. The conclusion: If the bagel was consumed in nibbles, the test subjects ate less, and the desire for the next lunch was not as strong as that of the comparison group. According to this study, appetizer eaters consumed 28 per cent fewer calories.

According to a study by Brigham Young University, people who watch their bites lose around two kilograms of weight a month. Those who chewed more automatically reduced their food intake by 20 to 30 per cent.

If you've never figured out how to handle chopsticks, now is the time to learn. They require more skill than eating with a fork and knife - and thus slow down food intake. Which brings us back to Tip 1. Especially pasta and rice dishes, of which you cannot get enough, are ideal for eating with chopsticks. But fish, salad and vegetables can also be consumed with it.

A tip that may sound drastic, but is handy: set limits on when you can go to the kitchen and eat - and concentrate on your goals. For example, you could say that after 8:00 p.m. you no longer go into the kitchen so that you are not tempted to eat at night. It is also a good idea to brush your teeth immediately after eating. So you mentally stop yourself from reaching for something sweet.

6. Sit at the end of the table

Are you invited to a dinner party or a birthday brunch? Then you better take place at the end of the table. Because the main dishes, bread bowls and starters are definitely not placed there. A marginal place makes it much more challenging to get there all the time - and this will definitely benefit your weight loss plans.

The hunger centre in the brain is connected to the olfactory centre at the root of the nose. As soon as you smell certain smells and flavours, a feeling of satiety is already triggered in the brain. If the right nerve impulses are hit in the mind, hunger can be prevented. Vanilla and cocoa oil, for example, are particularly suitable - they boost endorphin and serotonin production. Happiness without chocolate and Co.

Instead of drinking soft drinks or nectar, it is better to use water. To make it a little more appealing, you can add cucumber, lemon, basil and mint to it - and put it in the fridge. Looks delicious and tastes much better than pure water thanks to its aromas. A unique form of this is lean water, with the help of which you can lose three kilos within three days.

Short city trips can make it challenging to eat healthily. Quick snacks in between and substantial dinners do not have to be - with a little planning. Ensures a balanced breakfast in the morning, in between there is fruit instead of chocolate bars. Do not skip meals so that the big cravings don't come in the evening. In the restaurant, the best thing is to go for healthy dishes. And ask yourself: does it really have to be the extra portion of parmesan? Or: can't I leave out the dessert?

Can the plate colour really influence eating behaviour? A question that has to be answered 'yes' when it comes to Oxford University scientists. Some time ago, they discovered that red plates are useful as a weight loss aid. Her subjects ate the least of these dishes. The colour generally seems to have a significant impact on our eating habits: Cocoa supposedly tastes best from orange cups.

Food tastes twice as good with fat because fat is a flavour carrier. However, if you want to lose weight, you have to primarily do without fat. The taste is compensated with the right spice mixture. The best thing about it: intense aromas trigger satisfaction more quickly and curb your appetite. Basically, all meals can get more flavour - just try what tastes best. But be careful! Salt brings to character, no aroma. It does not curb your appetite but increases your thirst for calorie drinks.

Avoid sweets? It's easier said than done. However, if you want to lose weight sustainably, you should avoid chocolate, gummy bears, etc. - or only enjoy in moderation. The same goes for alcohol because it slows down the burning of fat. Alternatively, you can chew gum in between to dampen your appetite. Another plus: the sugar substitute xylitol works against tooth decay.

Are you one of those people who like to eat a low-calorie soup before the main course? Then you instinctively do everything right because you absorb around 20 per cent fewer calories than people who turn directly to the main course. At least that's the conclusion of a study by Penn State University in Pennsylvania. The reason is simple: soup consists mostly of water, which fills you up faster.

Wine is a guarantee of extra calories - and how quickly a bottle can be emptied with your best friend, especially with jumbo glasses. According to a study by scientists from Cornell University in New York, people who prefer large lenses drink around twelve per cent more wine. Whole 24 per cent more are drunk by people who also hold their wine glass in their hand. Means: If you want to save calories, drink wine from a small glass and put it on the table.

Long-lasting satiety has the advantage that you do not feel any cravings between meals. For breakfast, for example, cereals made from oatmeal, nuts and fresh fruit are suitable instead of cornflakes or toast. At lunchtime, potatoes, whole grain pasta, eggs and legumes are suitable. If you still need a small snack, it is best to grab oranges, apples and grapes.